Amadlelo Agri has a long-term vision of turning dormant land into productive farms. 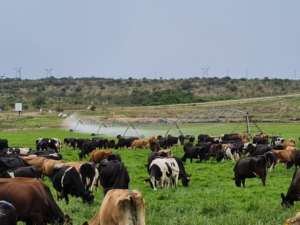 This vision is born out of Amadlelo’s strong conviction to contribute to South Africa’s economic transformation agenda through unlocking latent land potential to empower black people and give them a strong foothold in the agricultural sector.

The company, which operates five dairy farms in the Eastern Cape, has adapted New Zealand’s sharemilking model for rollout in South Africa, where it enters into partnerships with land-owning communities to establish dairy farming operations on land that was previously unused.

Under a sharemilking contractual arrangement, Amadlelo (the sharemilker) is responsible for hiring labour, milking the cows, day-to-day management of the farms, and finding buyers for the milk. Amadlelo also owns the herd of cows and moveable assets (equipment) needed to operate the farm.

On the other side of the coin, the communities own the land and fixed infrastructure, which effectively gives the company access to milking parlours, fields, pastures, and barns. In essence, this is a marriage between a herd-owning sharemilker and land-owning communities.

“Sharemilking has had a big and positive impact in the communities in which we operate our farms. Since we started our first dairy operations in 2008, Amadlelo has paid R869 million into communities in the form of wages, profits, and land rentals,” explains Amadlelo CEO Simpiwe Somdyala.

Amadlelo, a 72% broad-based black-owned company, operates dairies in Alice, Middledrift, Shiloh, Keiskammahoek, and Ncora. The company is also a strategic investor in a macadamia farm, a piggery, and food manufacturing company Coega Food Group. From its dairy farms, the company produces 28 litres of milk per annum. The entire South African industry produces 2.8 billion litres a year.

The company has access to 2 205 hectares of irrigated land, where it keeps 10, 024 cows including heifers and calves. On the irrigated land, Amadlelo plants maize, lucerne, and other animal feed.

To date, the land under Amadlelo’s management is valued at just over R500 million.

Amadlelo acts as an aggregator for the land-owning communities based mostly in the rural Eastern Cape, which often do not have expertise and investment capital to produce milk on a large, industrial scale to compete with established players.

“With land parcels ranging from 0,5hs to 5ha per household, rural communities lack economies of scale that enable them to be competitive and to exploit market opportunities.

“Rural communities cannot compete with established local and global producers that produce on a scale, thus these communities also need scale to be competitive. The market we compete in requires scale and consistency of supply, quality and predictability,” explains Somdyala.

Somdyala’s assessment has been collaborated by a recent study by the Competition Commission, which found that there had been a 73% drop in number of milk farmers between January 2007 and January 2021 from 3,899 farmers to 1,053 farmers.

This huge decline was due to the reality of small-scale farmers’ inability to reach economies of scale that enable them to reduce costs and increase revenue in order to be profitable.

The concentration of production power in the hands of a few large farmers has created barriers to market entry and reduced the chances of small black farmers and rural communities entering or participating in the dairy market and its supply chains.

Sharemilking, as practiced by Amadlelo, has made it possible for rural communities it has partnered with to participate in a highly competitive and commercialised South African dairy industry

In New Zealand, the world’s leader in dairy farming, sharemilking dates back to over a century ago. In that country, young dairy farmers have used sharemilking to accumulate experience and wealth, often using it to buy land from farm owners over a period of time. At the same time, former or retired dairy farmers use sharemilking to rent out their farms to earn income.

Dairy farming is a tough business that can be impacted by a number factors including rising input costs, fluctuations in milk prices, drought, disease outbreaks, covid-19 pandemic, and socio-economic challenges like crime, community infighting, and inadequate delivery of social services.

However, Amadlelo has persevered through these challenges by forging close collaborations and partnerships with key stakeholders, land-owning communities, government, and investors to mitigate the challenges and risks facing the industry.

Despite the challenges, Somdyala sees an upside in dairy farming and encourages investors to take advantage of available opportunities in the industry.

“We have capacity to scale up the current farms in the Eastern Cape. Furthermore, the scope for expanding to other provinces is enormous because our country is endowed with ample arable land. The dairy industry has a potential to create jobs and facilitate economic development in rural areas,” he concludes.